MEDIA RELEASE   Date:                October 26, 2009 Time:                1:45 PM   Williston, Florida-On October 22, 2009 detectives from the Levy County Sheriff’s Office arrested Bruce Nichols for burglary and grand theft.   The Levy County Sheriff’s Office investigated a burglary and theft at Ed’s Auto Salvage located at 2830 NE 200 Ave Williston, Florida.  The victim stated that on October 6, 2009 around 11 PM unknown person(s) entered the business by climbing over a six foot fence with three strands of barb wire.  Upon entry into the compound fifty radiators were stolen valued at $ 2000.00   On October 12, 2009 Ed’s Salvage Yard was burglarized again and over $ 12,000 dollars of antique radiators and starters were stolen.  Detective Roger Bell and Detective Mike Narayan questioned Nichols on October 22, 2009 about the above two incidents.  Nichols admitted to the October 6 theft and stated that he participated by assisting others in stealing the radiators but did not enter the compound.  Nichols stated that on October 12, 2009 he entered the compound twice and loaded a van with the stolen radiators.   Nichols was arrested for two counts of burglary and two counts of grand theft.   Defendant:   Bruce Nichols 2791 NE 200 Ave Williston, Florida Black Male 09/08/62           ### 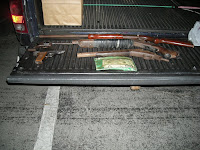 MEDIA RELEASE   Date:                October 26, 2009 Time:                9:00 AM   Chiefland, Florida- On October 23, 2009 the Levy County Sheriff’s Office executed five search warrants in the city of Chiefland and arrested 13 people during the round up.   During a six month investigation, the Drug Task Force has been purchasing powder and crack cocaine and cannabis from several drug dealers in the Chiefland area.  At 5 p.m., Drug Task Force Investigator Burt Miller briefed “Operation Trick-Or-Treat” to law enforcement officers that participated from the Chiefland Police Department, Alachua County Sheriff’s Office, Dixie County Sheriff’s Office, Gainesville Police Department, US Marshals Office and Probation & Parole.   Halloween night came early in Chiefland with over 40 law enforcement officers knocking on doors in search for drug dealers and not candy.  Operation Trick-Or-Treat is the conclusion of a six month investigation that undercover agents purchased drugs from drug dealers.  This round up was a success arresting 13 people and no one was injured.  Agents confiscated approximately $5,000 dollars in cash, recovered seven guns and seized powder/crack cocaine and cannabis.    Operation Trick-Or-Treat round up will continue this week in arresting drug dealers that remain at large.  The Drug Task Force Agents have 85 felony charges and 15 misdemeanor charges to file on the subjects.                       ###

MEDIA RELEASE Date:                October 22, 2009 Bronson, Florida- On October 22, 2009 Deputy Ella Anderson arrested Leon Wiggins for felony battery and he was transported to the Levy County Jail. The victim reported that she went to 450 Alvin Road in Bronson to purchase drugs from Wiggins on October 22, 2009 around two in the morning.  Upon arriving Wiggins wanted to exchange drugs for sex and the victim refused.  This infuriated Wiggins and threw the victim on the ground and started strangling her with both hands.  The victim reported that she fought Wiggins and he covered her nose and mouth and she lost unconscious on two different occasions.  The victim was able to free herself from Wiggins and fled the scene on foot.  Deputy Anderson observed bruising around the victim’s throat, face and shoulders and she was upset. Patrol deputies located Wiggins at 550 Hurst Street in Bronson sleeping in a vehicle and he was arrested without incident. Defendant: Leon Wiggins 550 Hurst Street Bronson, Florida Black Male 10/28/65       ###

MEDIA RELEASE Date:                October 18, 2009 Time:                9:00 PM   Bronson, Florida-On October 17, 2009 Deputy Ella Anderson arrested Matthew Edward Devers for two counts of domestic battery and resisting arrest without violence.    Deputy Anderson responded to 11711 NE 106th Court in reference to a domestic disturbance.  Upon arrival victim # 2 stated that Devers was mad at a relative and spit on the victim when they walked past him in the kitchen.  Devers was mad at victim # 2 from an argument that occurred a few days prior.  Devers then began striking victim # 1 repeatedly with a closed fist in the face, chest and arms.  Victim # 2 stated that she attempted to intervene and Devers directed his anger at victim # 2 by shoving her several times in the stove and kitchen counters.  Deputy Anderson observed red marks and bruising on both victims and they were extremely upset and crying.  The victims stated that Devers was hiding in the laundry room and to be careful because he will be extremely violent and explosive.    Deputy Anderson removed her taser from the holster and ordered Devers to lie face down on the ground.  Devers was hesitant but finally complied with the order.  Deputy Anderson told Devers not to move or he would be tazed.  When Deputy Anderson attempted to handcuff Devers he rolled over and yelled to “Shoot Me” and attempted to get up.  Deputy Anderson deployed her taser and Devers screamed and pulled the probes out and ran out of the residence.  Devers ran down the road and Deputy Anderson apprehended Devers one block from the residence and ordered Devers to the ground several times.  Devers refused the lawful orders, and he was pepper sprayed and told to lie face down on the ground.  Devers complied and went to the ground but then continued to get up.  Devers was held at gun point until back up arrived on the scene and he was arrested.   Devers was treated on the scene by Levy County medics for the chemical spray and he was transported to the Levy County Jail.                    Defendant:   Matthew Edward Devers 11711 NE 106th Court Bronson, Florida White Male 09/11/84       ###